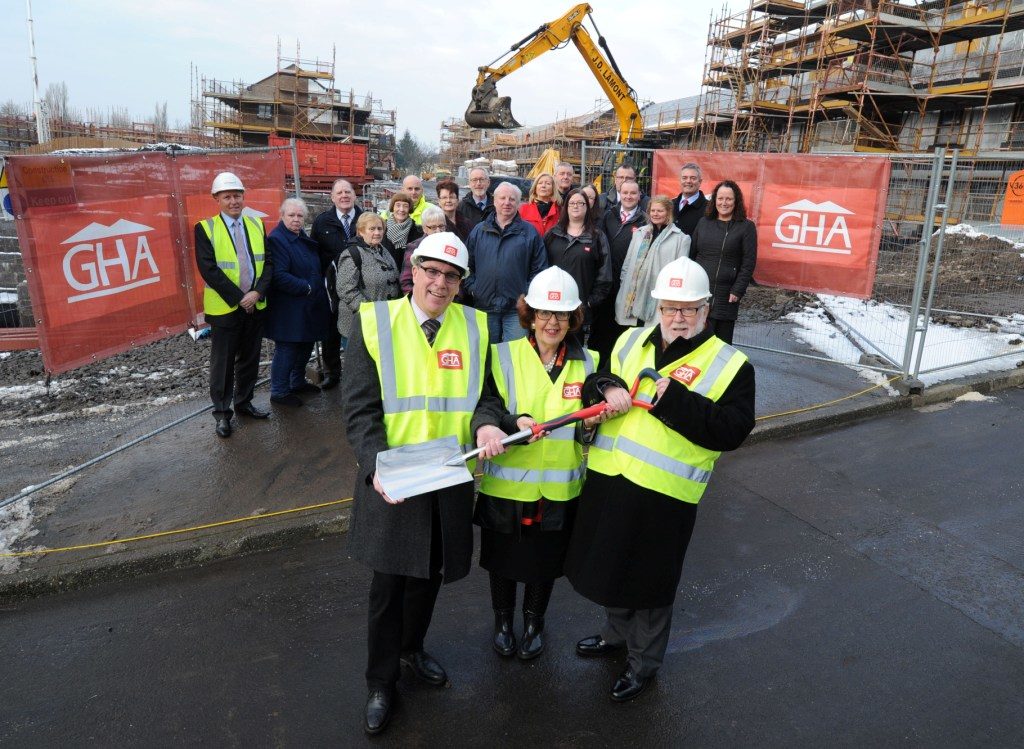 Tenants joined local councillors to check up on the progress of new GHA homes being built in the west of Glasgow. A total of 116 new homes are being built on the site of two former tower blocks in Scotstoun which were demolished last year.

The new homes, along with a major upgrade of the four remaining blocks at Kingsway Court, will help transform the site.

Local elected members – including Bailie Liz Cameron – joined GHA Chair Gordon Sloan, GHA tenants and staff as well as representatives from Glasgow City Council and the Scottish Government to see for themselves how work is progressing.

The development is made up of 102 flats and 14 houses, with seven of the flats designed to wheelchair standard. The £10.5m project is expected to be complete around April next year.

Bailie Liz Cameron, Executive Member for Jobs and the Economy at Glasgow City Council, said: “The development of these new houses and flats at Kingsway Court is great news for the area, bringing high-quality new homes and jobs for local people.

“I am delighted that the existing homes beside those currently being built have already been refurbished, and I look forward to seeing the whole project being completed.”

The homes, being built by contractors McTaggart, are for tenants whose homes are being demolished as part of GHA’s contribution, with its partners, to the regeneration of the city.

GHA Chair Gordon Sloan said: “It’s exciting to see these new homes take shape and I know they will be a real boost to the Scotstoun area. These modern, stylish homes are also energy-efficient and will help cut tenants’ fuel bills.”

McTaggart, as part of its contract with GHA, will provide training and employment opportunities for local people along with supporting community projects and businesses.

Gary Climson, Managing Director of McTaggart Construction, said: “We are delighted to be delivering this prestigious project on behalf of GHA. The local community will begin to see the development taking shape on site over the next few months and can look forward to moving into their new homes.”