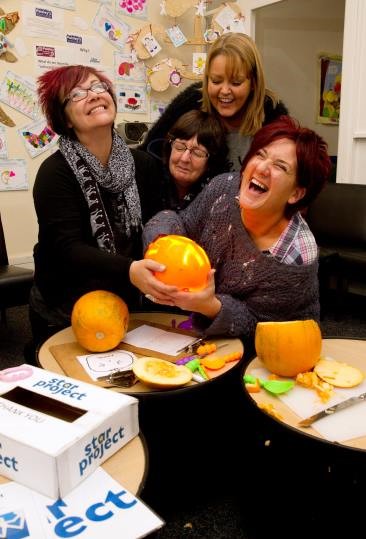 An award-winning local charity has received a £20,000 makeover thanks to
Renfrewshire’s newest affordable housing development.

The STAR Project’s base in Paisley’s Wallace Street was refurbished as a community benefit of Sanctuary Scotland’s regeneration of Shortroods.

The makeover has delighted staff, volunteers and the 500-plus Paisley residents who use the STAR Project each year.

The charity’s project manager Sharon McAulay said: “These improvements are a massive boost and would not have been possible without Sanctuary’s support.

“They allow us to focus on developing services the community needs, rather than focusing on finding ways to improve our building.”

Sanctuary Scotland has built 309 new Shortroods homes since 2002. The keys to the final 86 properties, which cost £9.6 million to build, were handed over to residents in September.

Pictured : Sharon McAulay (left) with other staff and volunteers.